During a vacation to Grand Teton National Park, we summited the Middle Teton in the Cathedral Range. I am happy to report a first successful activation. Continue reading for trip report and my contacts. 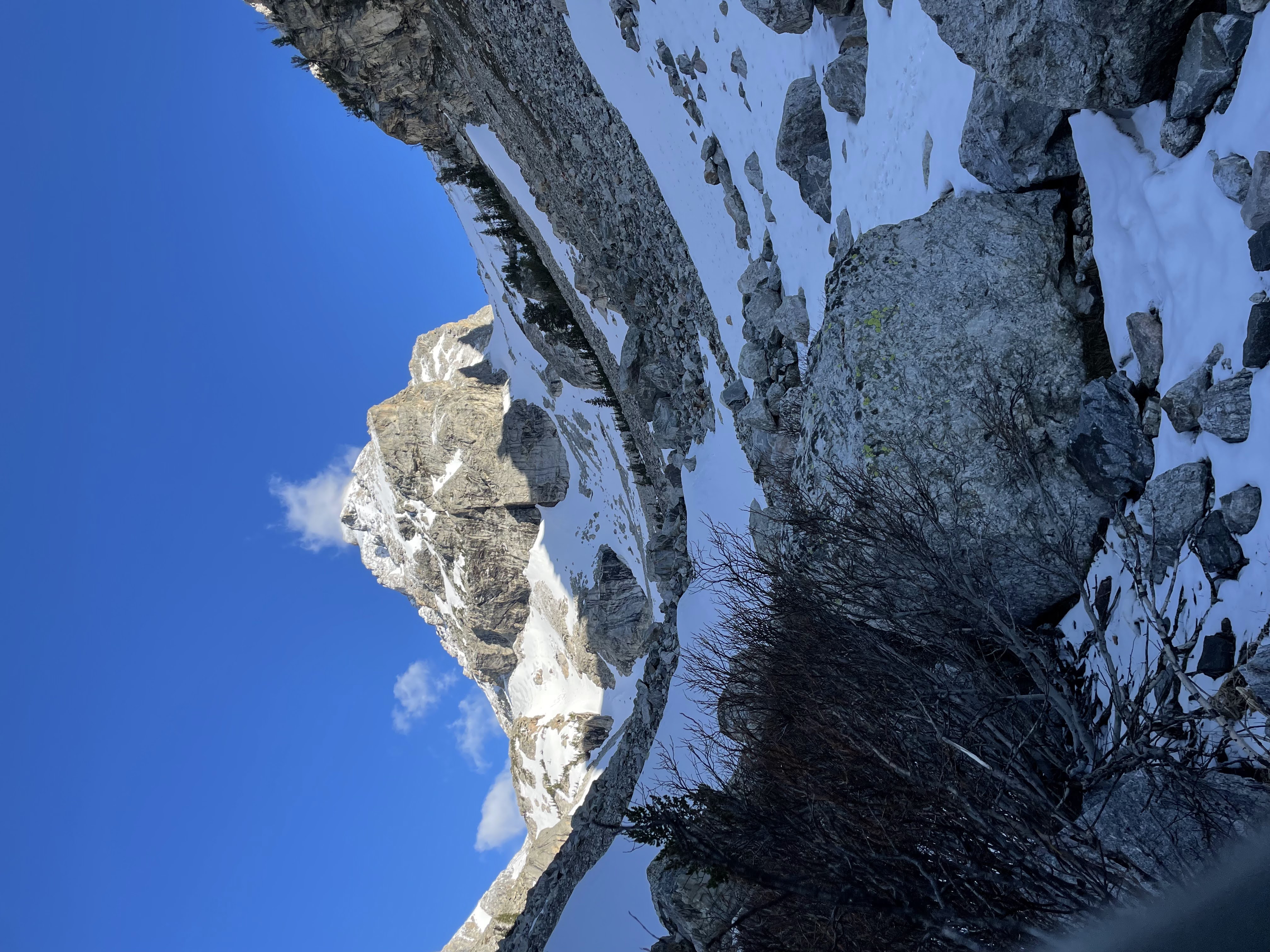 Middle Teton is a 10-point summit in Grand Teton National Park. It is nearby several other unactivated SOTA Peaks, including South Teton, Mount Owens, Nez Perce, and of course the Grand Teton.

The cathedral range is magnificent. It offers unparalleled views of the park below and, as you get higher, views out to Idaho and the west faces of the range. 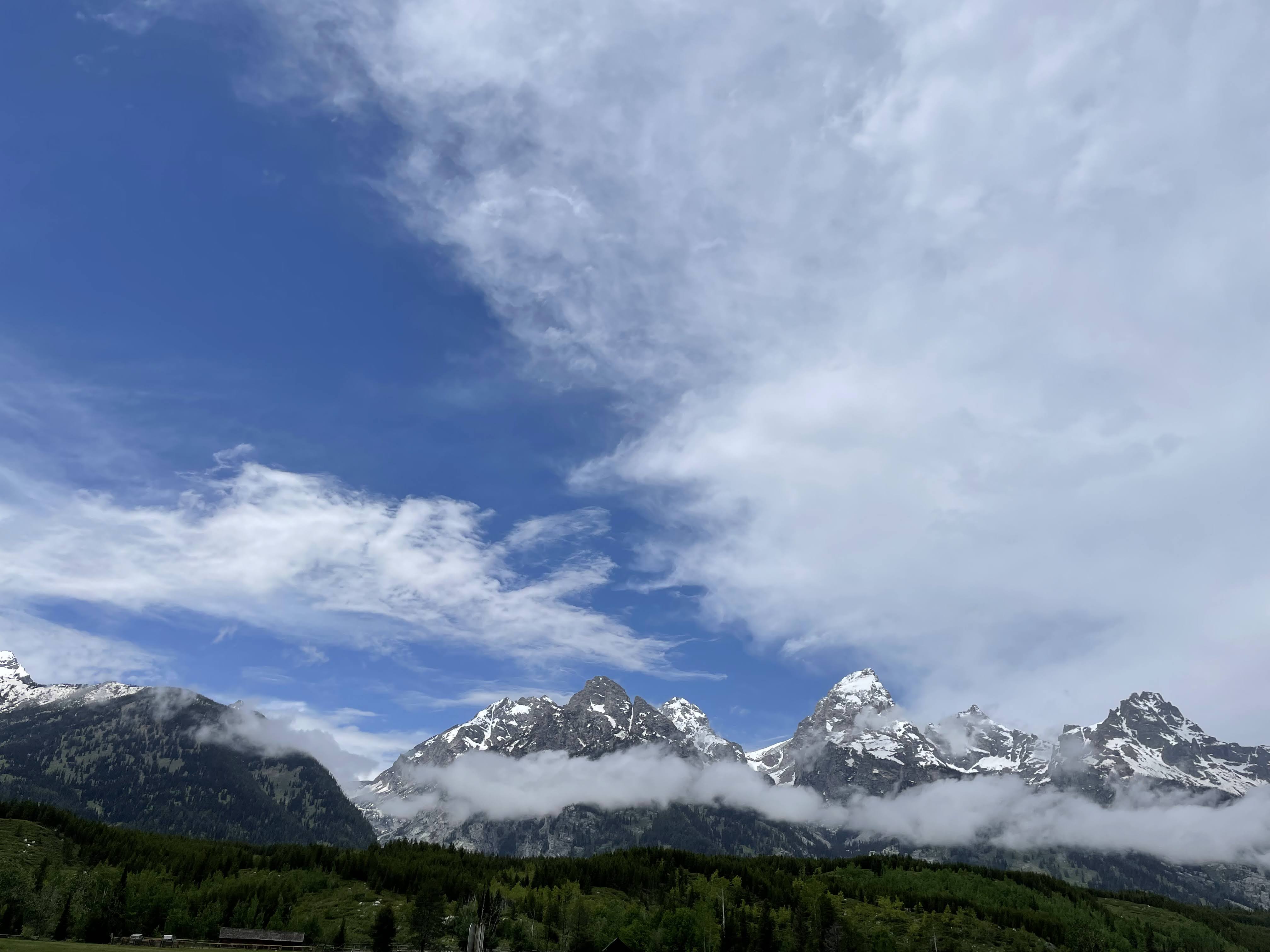 Cathedral Range from the Teton Lookout. Middle Teton is to the left of the tallest (Grand teton)

National Parks have associted fees and regulations. Thankfully, it is open 24hrs for a nice early ascent. We started at the Lupine Meadows Trailhead which was packed by the mid-afternoon when we came down.

Many summitpost reports gives great detail to where to start and how to continue. We used the Southwest Couloir although we were early in the season. There is even an alltrails link despite this being a solid mountaineering hike instead of an Alltrails summit.

We consulted our own friends, park rangers, and mountaineering stores for their advice. They all said it would be possible with an ice axe and crampons in mid-June. They were exactly right - an ice axe really made all the difference.

Remember to check for weather to avoid the Rocky Mountain Thunderstorms. We were off the summit before 1300 and started at 0430 - the technical parts really slow the hike down of nearly 6k feet of gain.

The approach is a very easy class 2 trail along the Lupine Meadows Trailhead with a turn to go to Garnet Canyon.

We took a picture from Jenny Lake to detail the map: 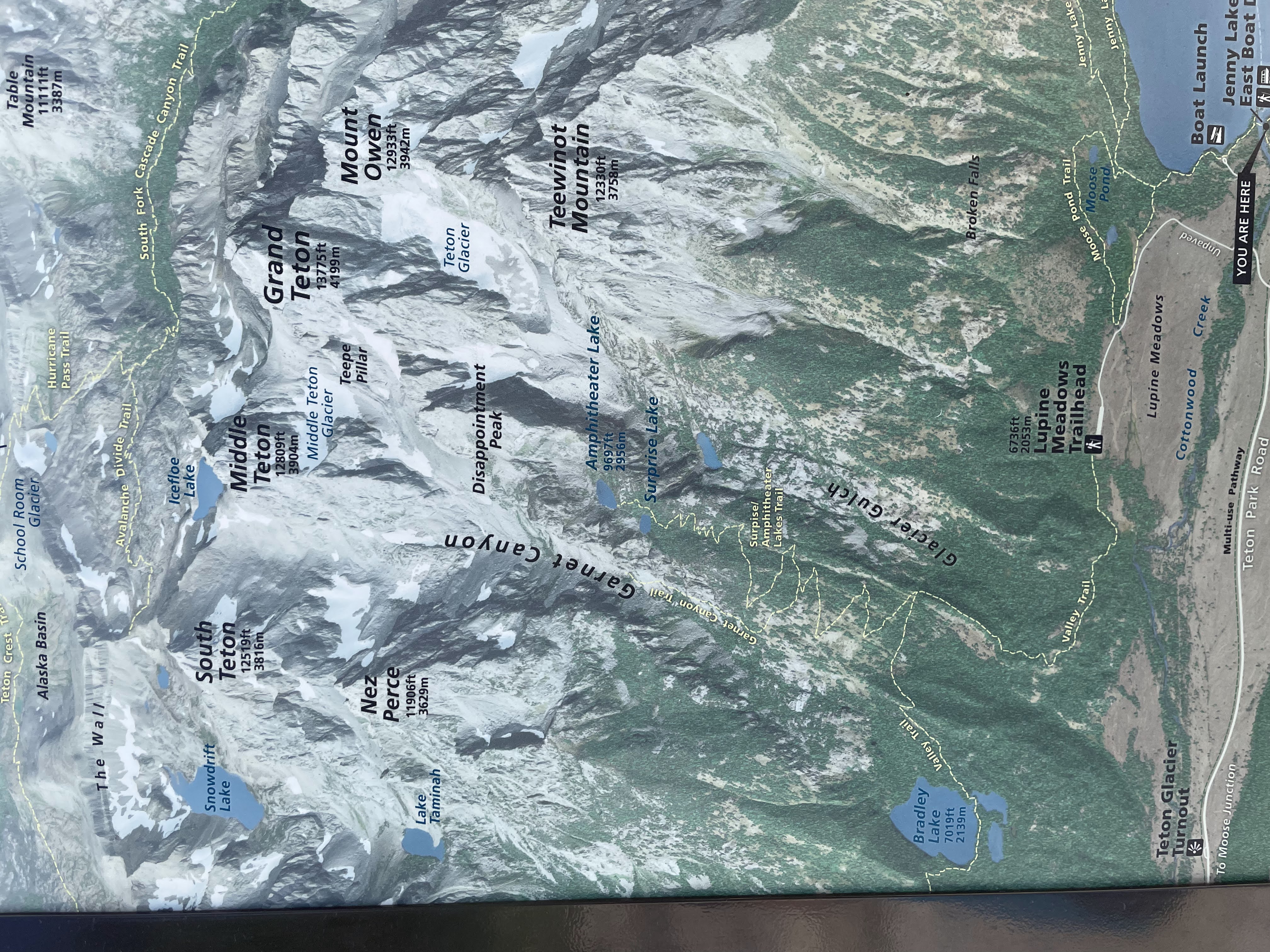 The first 3 miles are a breeze and we remained vertical the whole time. Of course it’s steep but much easier than the following ascent. If you start early enough, you may be able to see a beautiful sunrise: 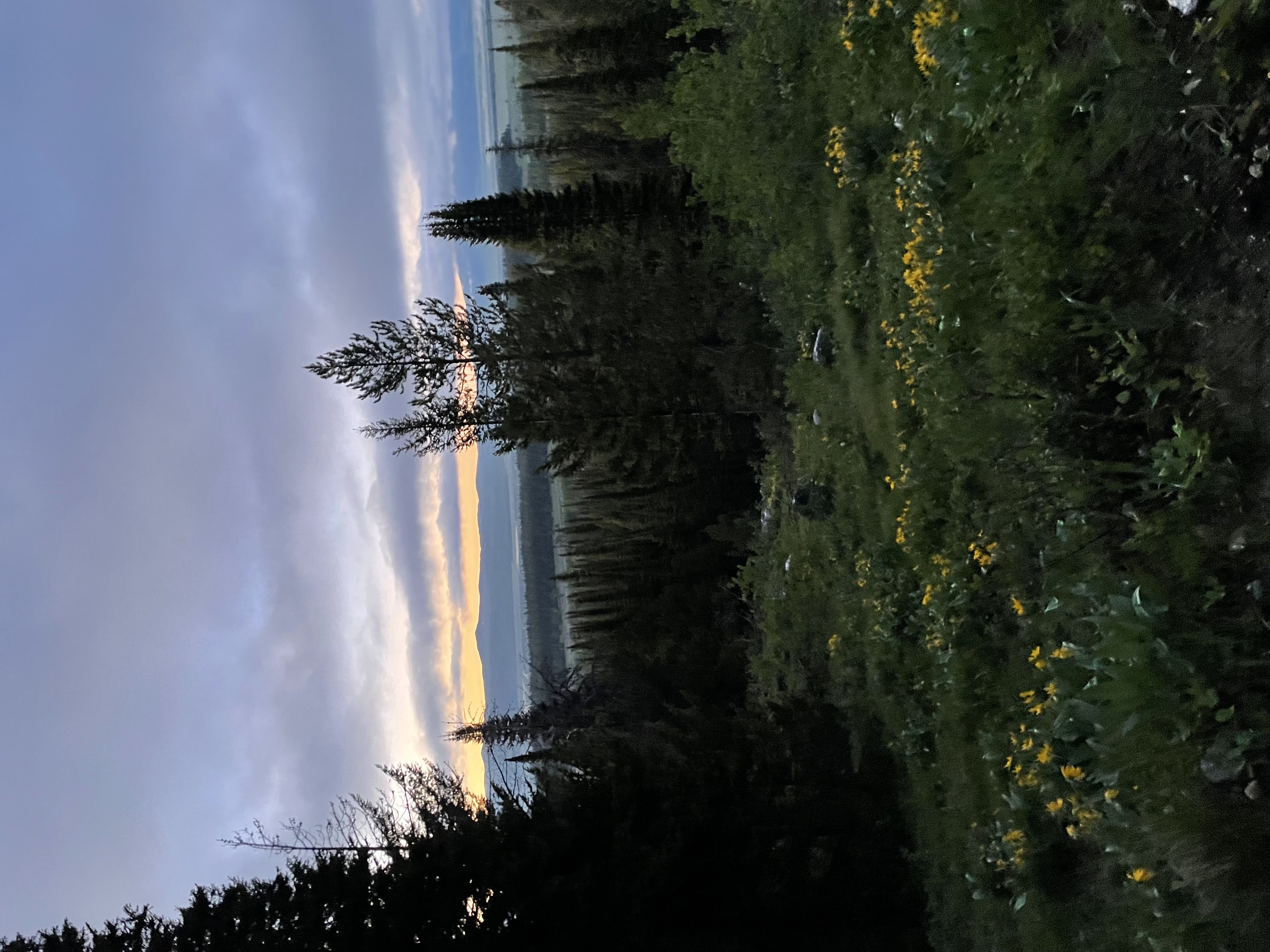 Sunrise in the Lupine Meadows 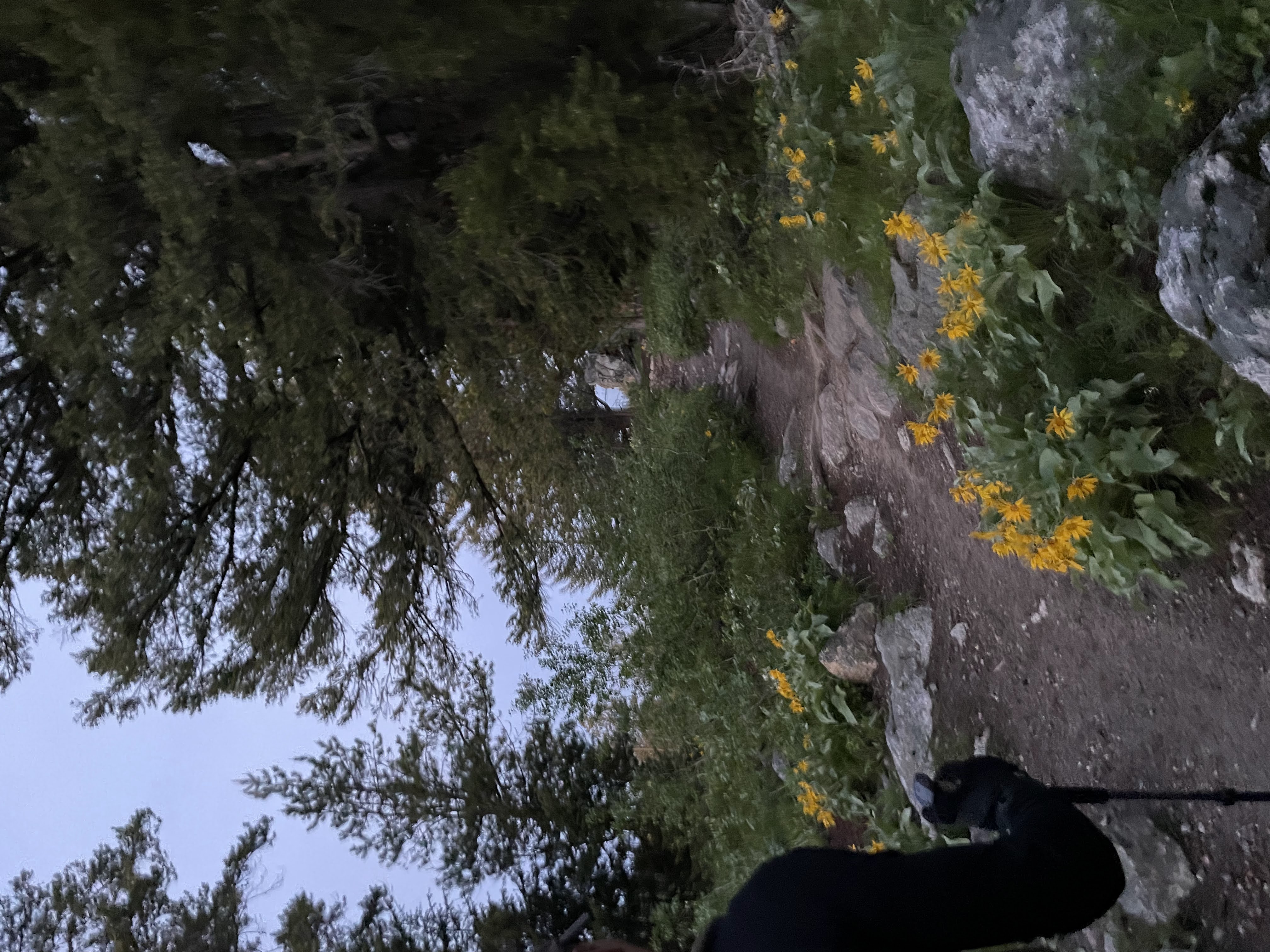 Morning Ascent up to Garnet Canyon

I must also warn about animals. On the hike we saw:

I advise you rent/buy bear spray and carry religiously. I got much too close to a bear (saw the cub but not the mama) and was glad I had the spray on me. Thankfully she disappeared by the descent. 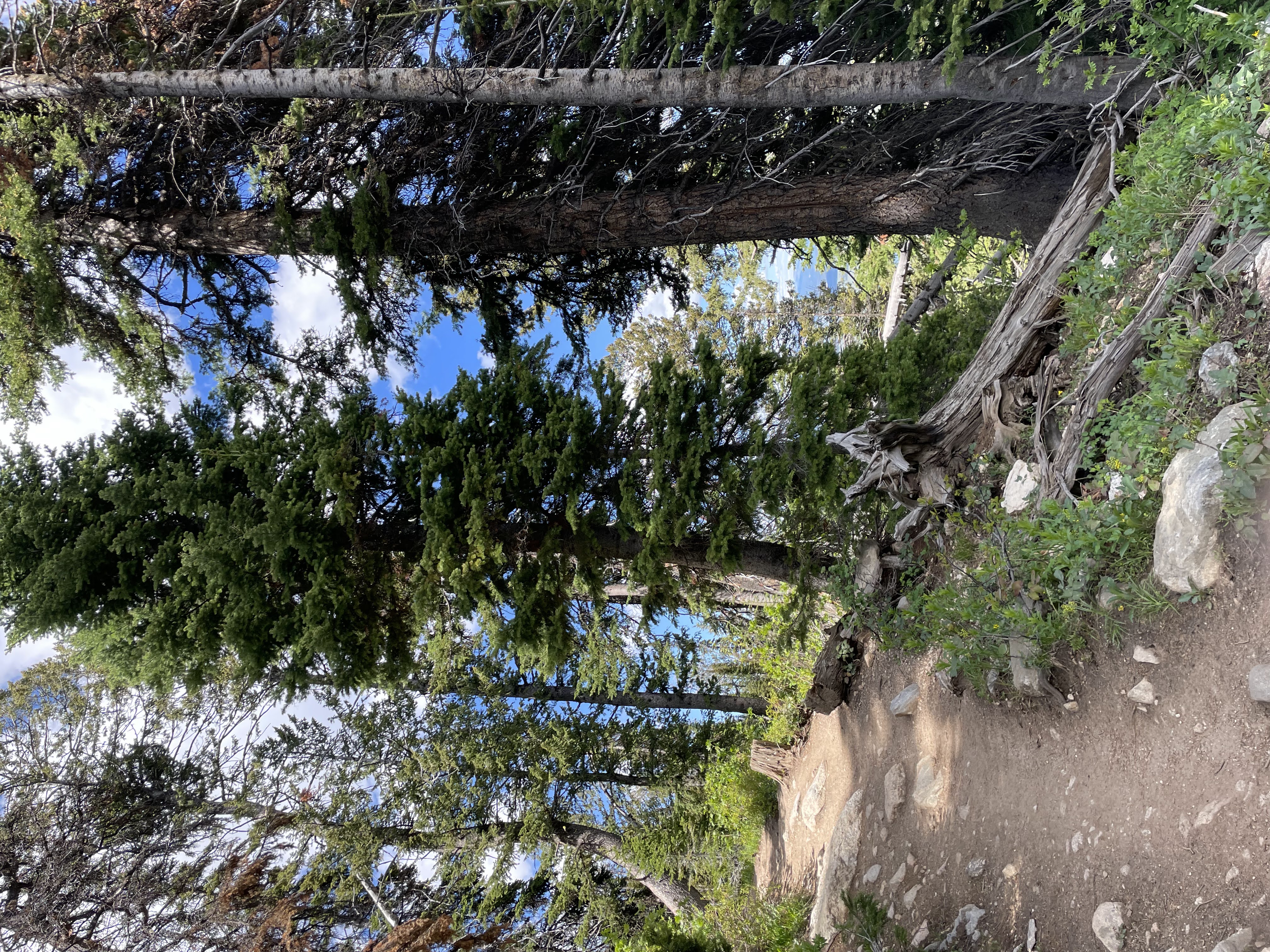 The tree the baby club climbed

After about an hour and a half of climbing, we reached Garnet Canyon (and the end of the easy trail) at 0700. Middle Teton came into view: 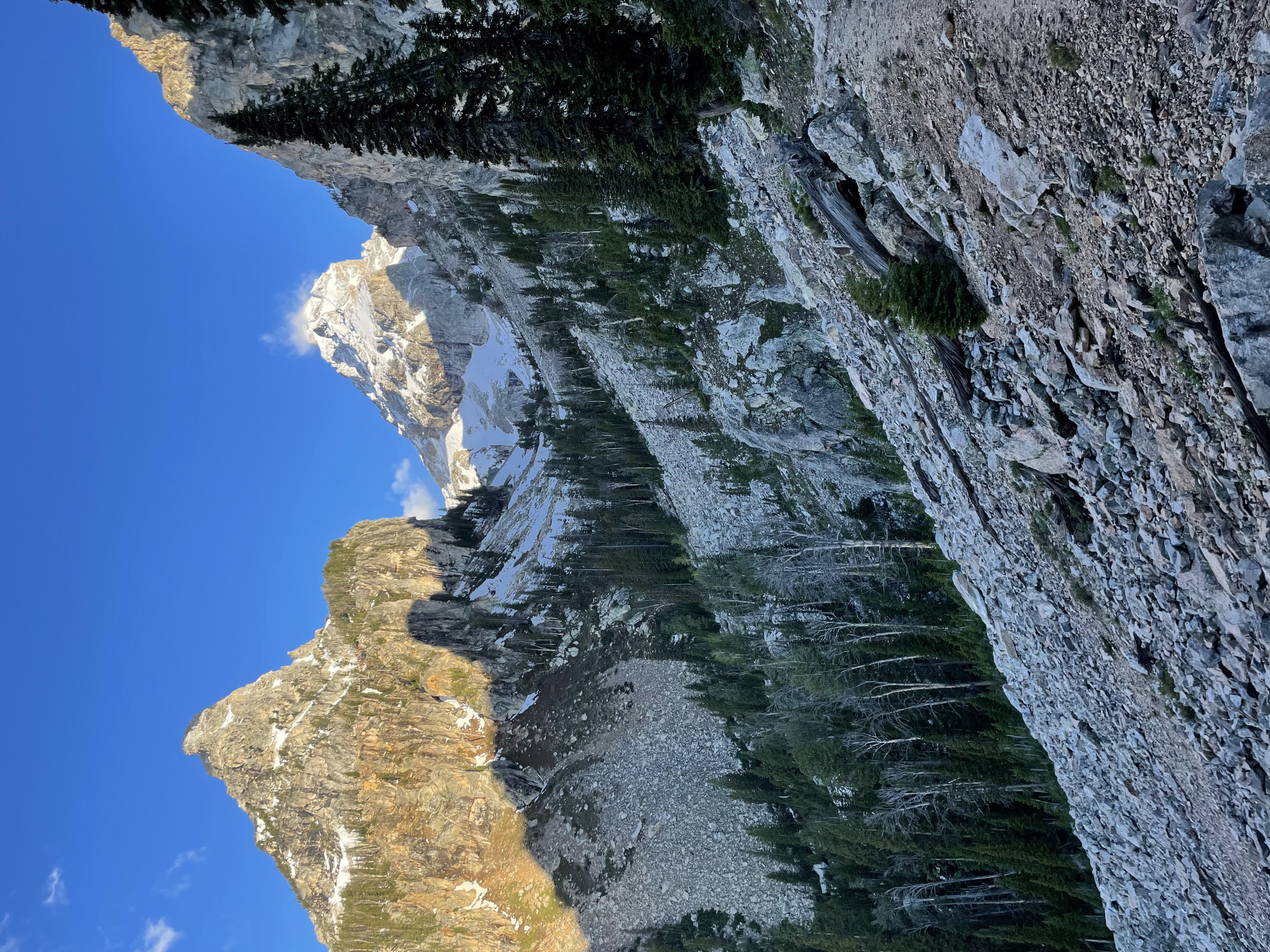 In case you didn’t know which one is middle: 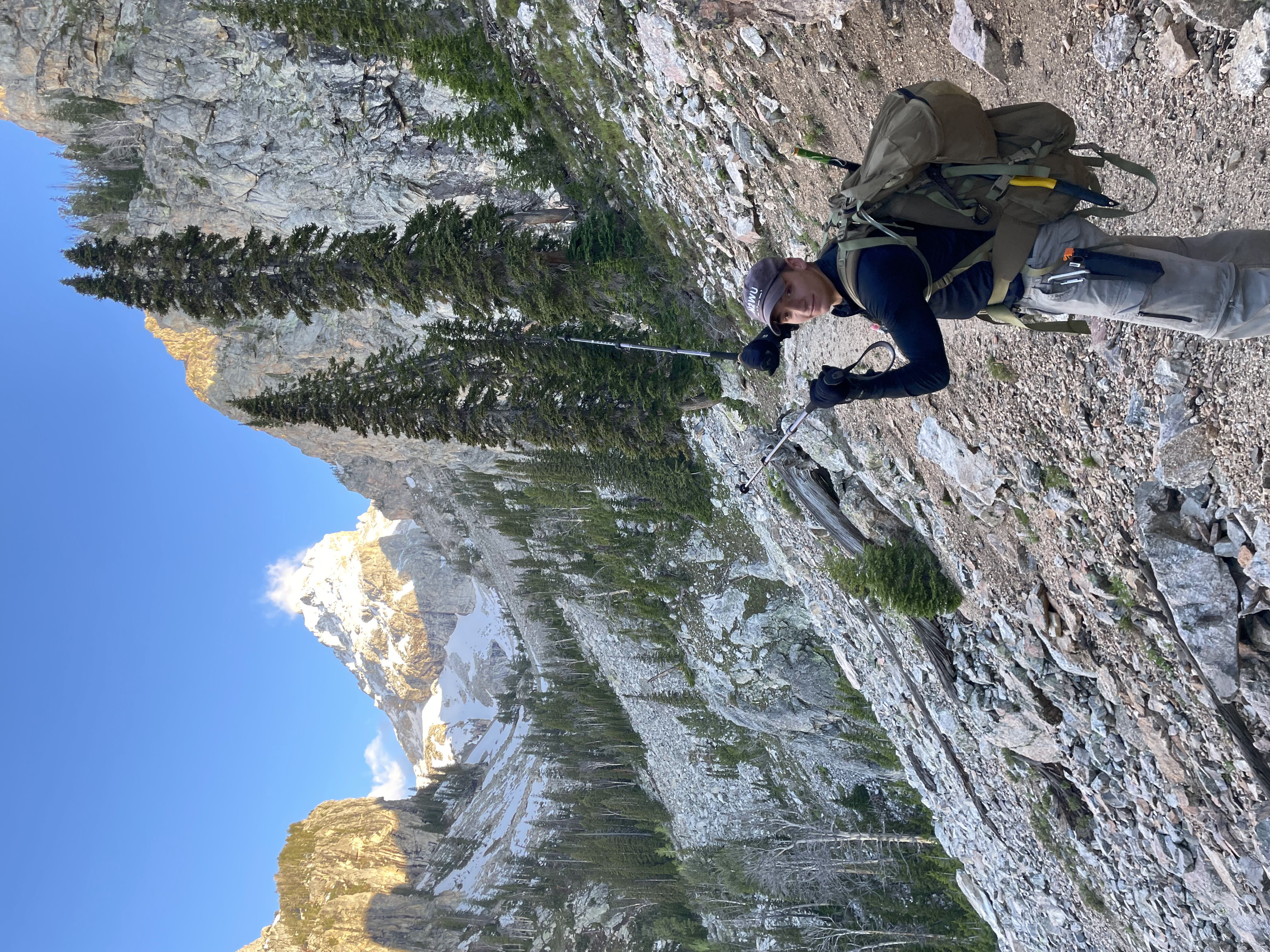 So here’s where it gets rough. We donned our crampons (microspikes) and I grabbed my ice axe for some snow sludging. You will follow the creek further and make your way up to the saddle between Middle Teton and South Teton. 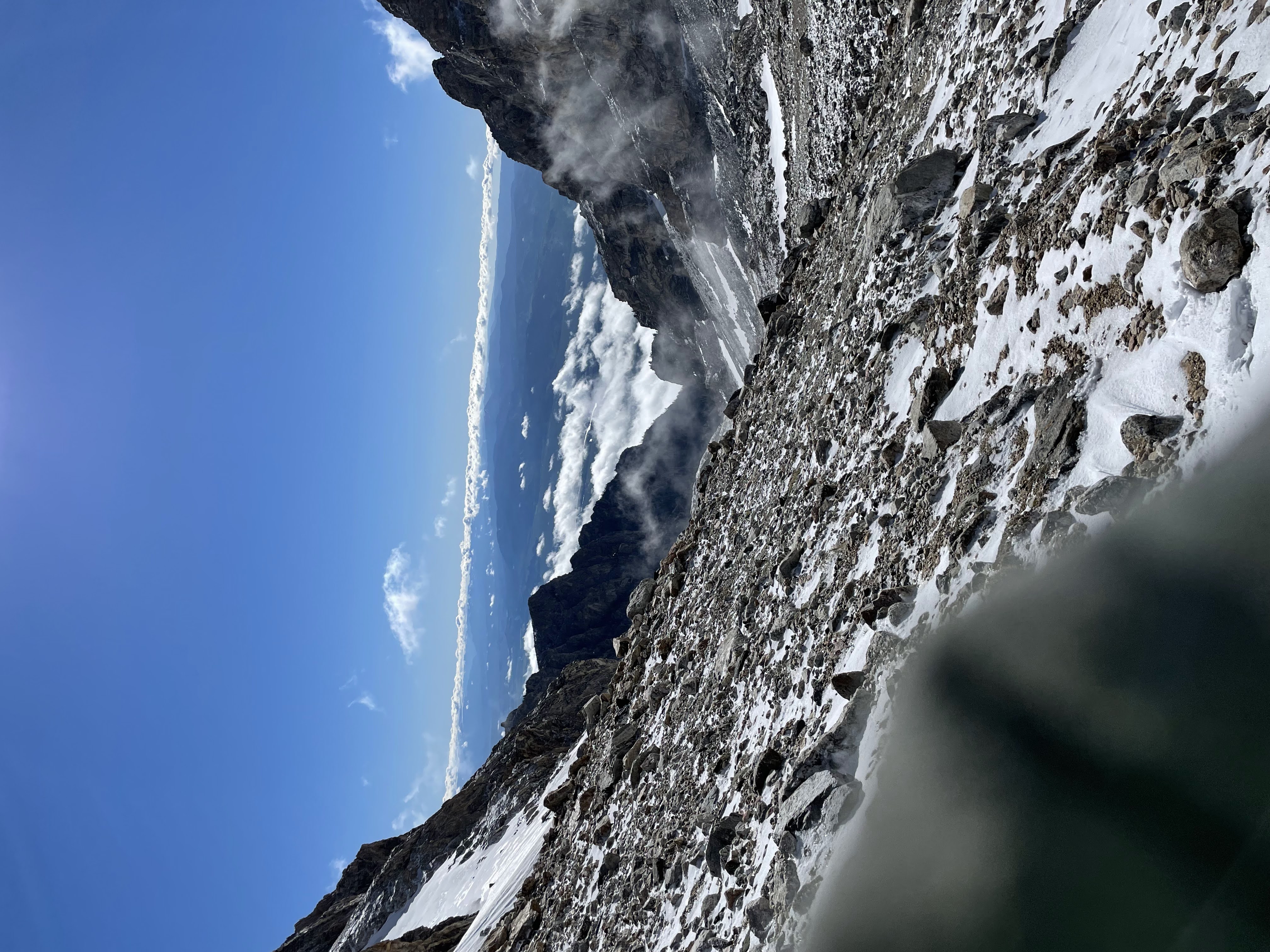 Saddle in the distance

It is really just easiest way up. We found hugging the left (southwest) side was easiest, but I still had to stepcut with the ice axe to make it easier for my non-axed YL. 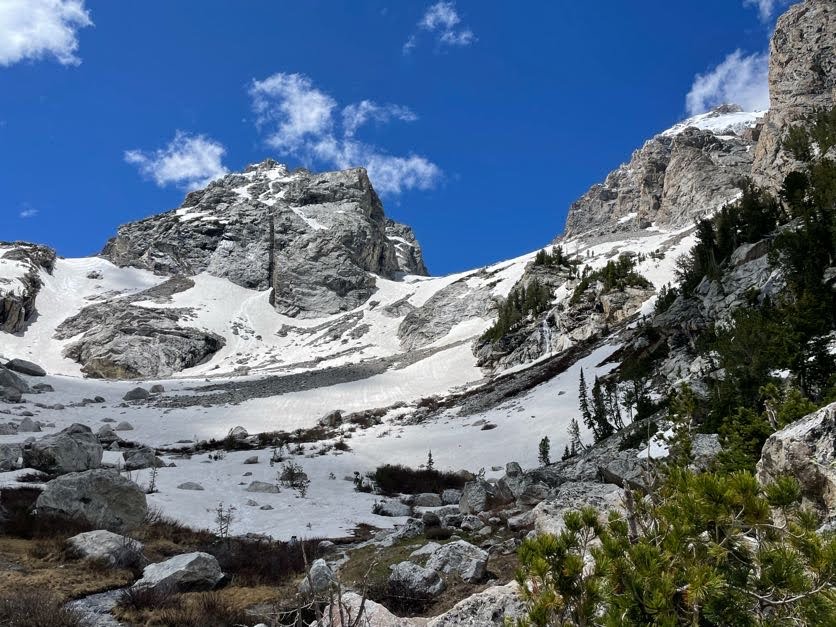 After the saddle, you’ll get some good views of Idaho and Table Mountain. Take a sharp right for some steep class 3. 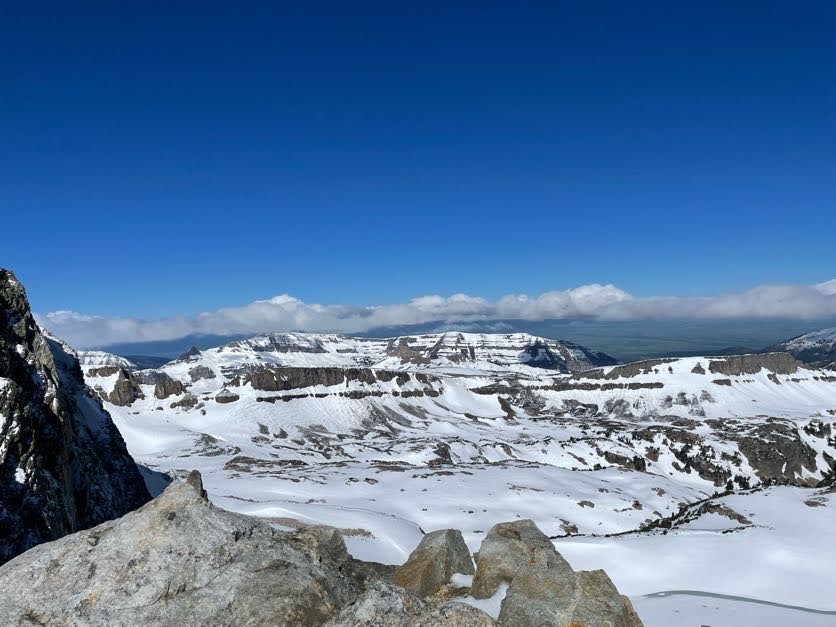 But enjoy the view (and possibility?) of South Teton while you’re there. 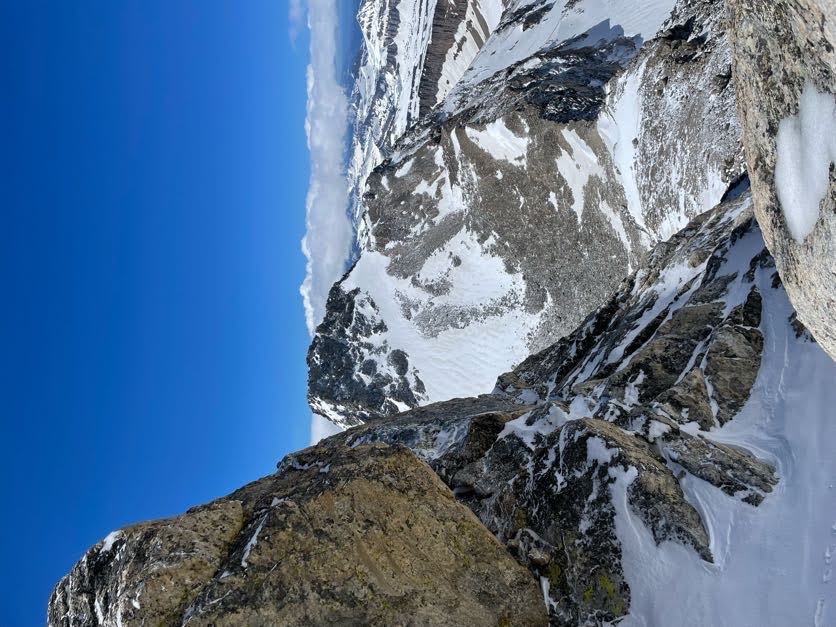 After steep class 3, some boulder fields, and more class 3, you need to find the southwest colouir. Head straight up the ridge and keep an eye out for a “canyon” (colouir) up to the left. This is the southwest colouir, the easiest way to get up. In early season attempts you need an ice axe. I self-arrested and used it to get up so many times, but my partner was not as lucky. There was fresh snowfall the day before that obscured footprints, but look for the easiest routes on the way up. Summitpost may help.

After much routefinding and desperation, we realized we wouldn’t be able to reach the true summit. We decided to set up where we are (a lucky 60ft below the peak) and activate.

This colouir was steep. Practice self-arrest techniques before so you don’t get injured.

You may be able to see me way in the distance on this rock:

The rock most certainly hindered my propagation, but I got my required and headed back down. Lots of steep glisadding and self-arresting to get down the snow, which was melting in the afternoon sun.

We still made for a good picture on the rocks. 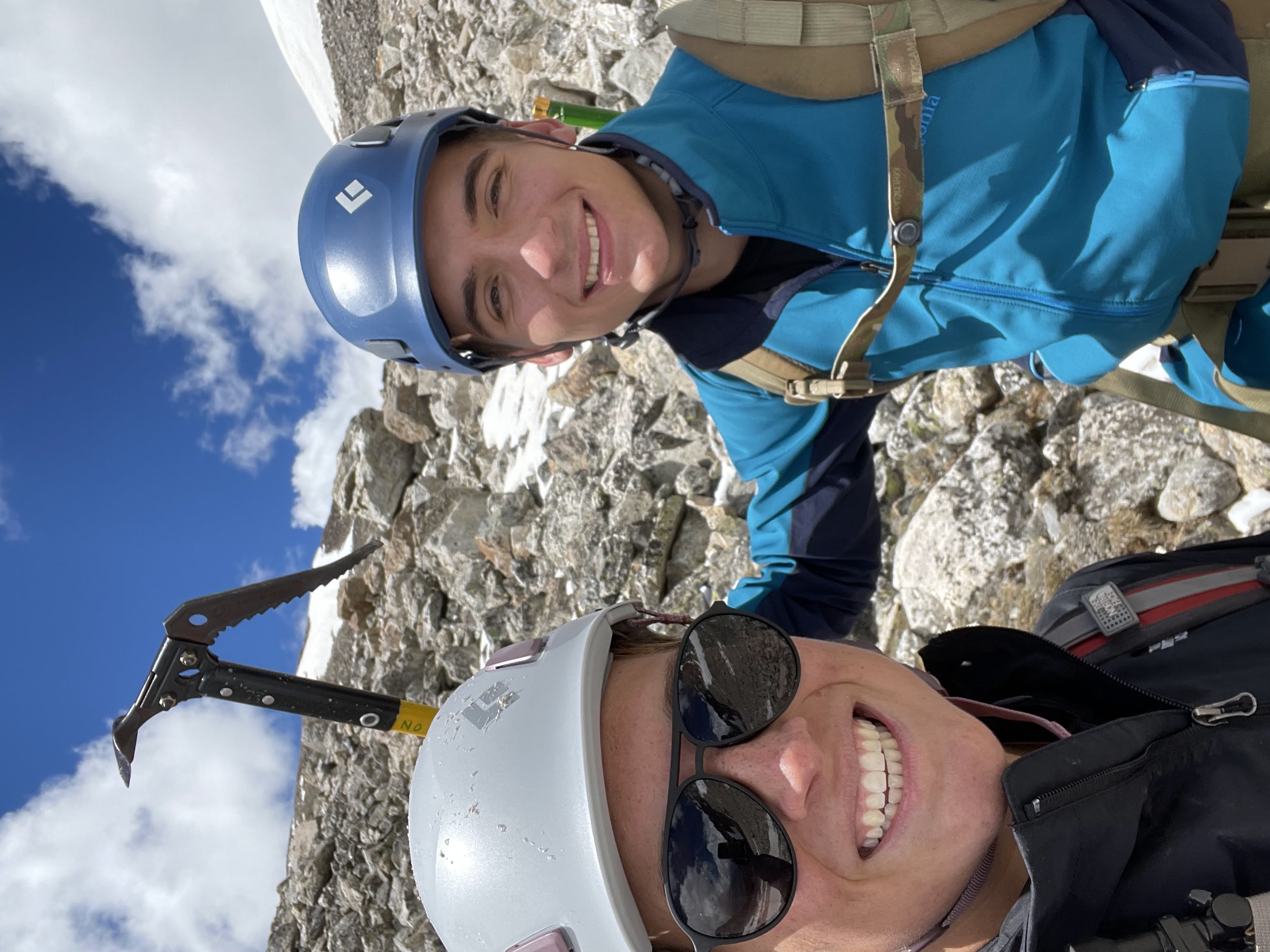 I brought everything needed for an alpine ascent.

These items mimic the standard 10 Essentials

We brought only basically what we needed to keep light. I used an old version of the Mystery Ranch SATL Ruck which had the added bonus of a Radio Pouch which kept everything secure and high on my back.

I changed my setup to be a little lighter. I did away with my key and removed vital components from my case (the EFHW balun and battery charging switch) to be inside small plastic containers inside the KX2 carrying case:

I put my information on SOTAWatch and actually made it on time. I was straining hard to hear and only got local HF contacts due to the giant peak to my rear.

We were our safest and most cautious down the colouir. We could only really glissade down the steep parts because the rocks started to accumulate ice. Some steady downclimbing led to the saddle, which led to more glissading, which at last led back to the trail.

After shedding our crampons and axes, we were finally back on the Garnet Canyon trail. The lakes on the way down looked beautiful: 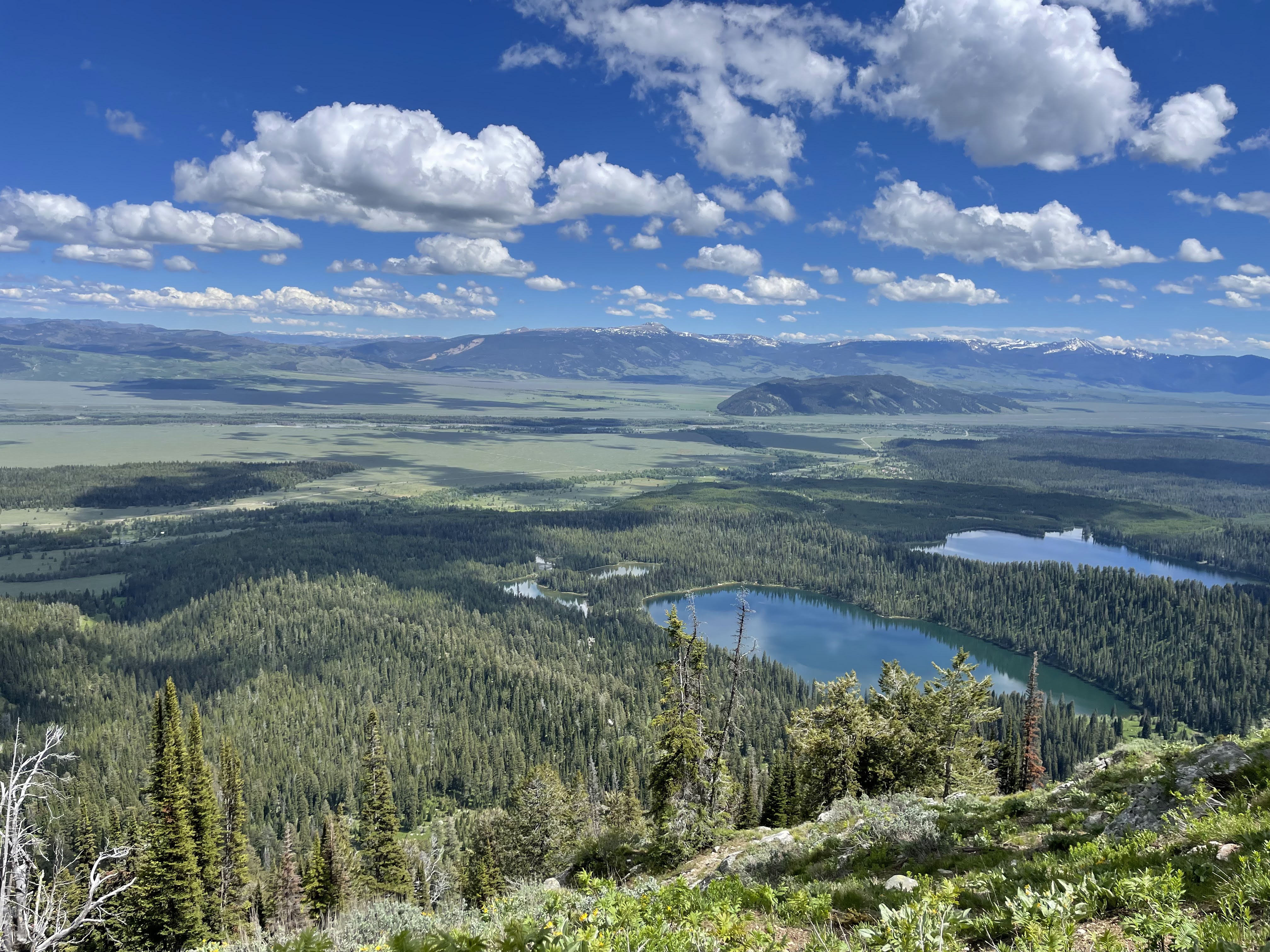 Back at the trailhead we were greeted by a marmot reminding us of the animals we saw up in Garnet: 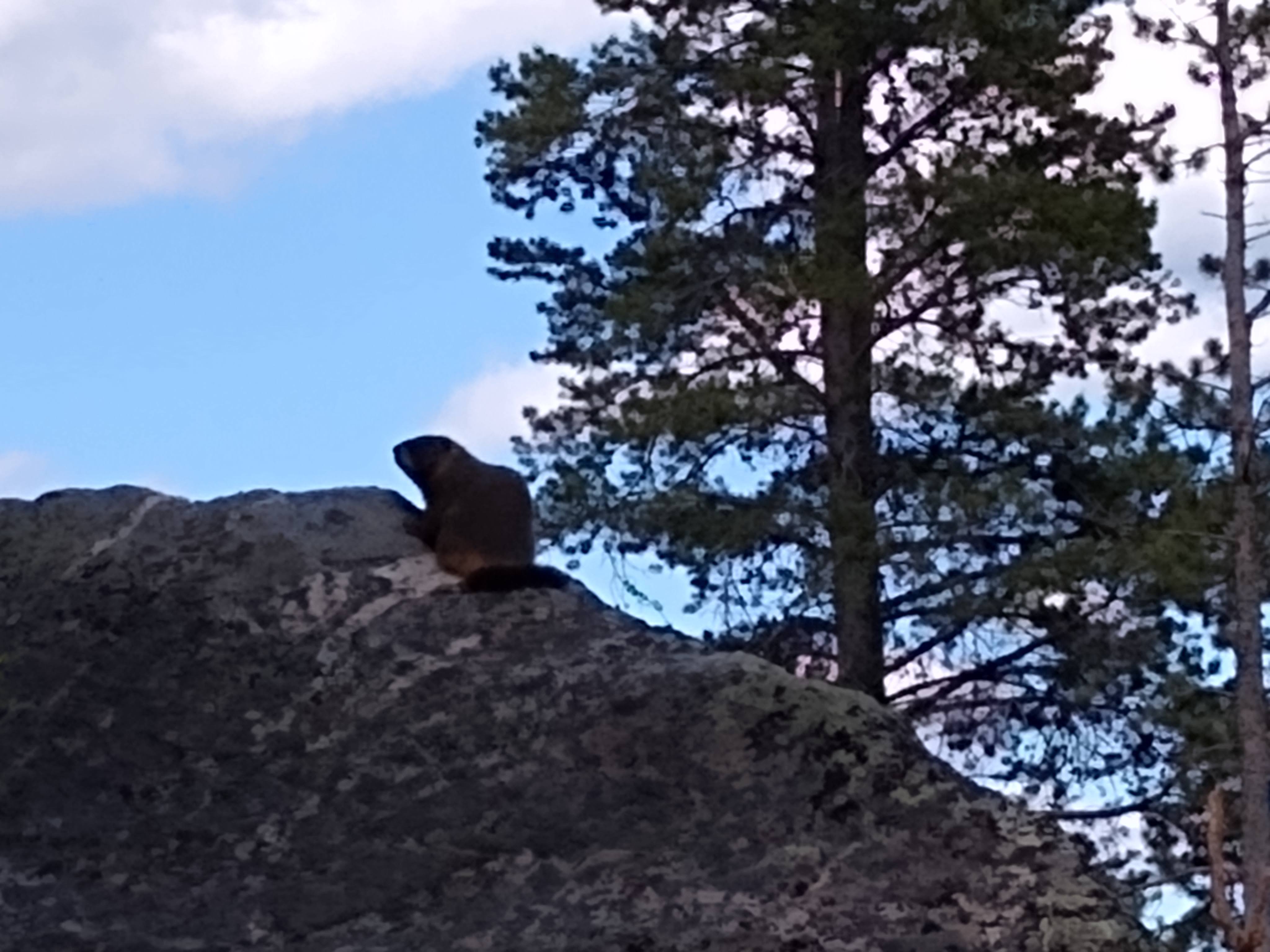