Over last weekend I visited W7W with a friend. We managed to get in two activations in Mt Rainer National Park with Tolmie Peak RS-035 and Elizabeth Ridge RS-049. I’ll share my contacts, route, and improvements for future operations. 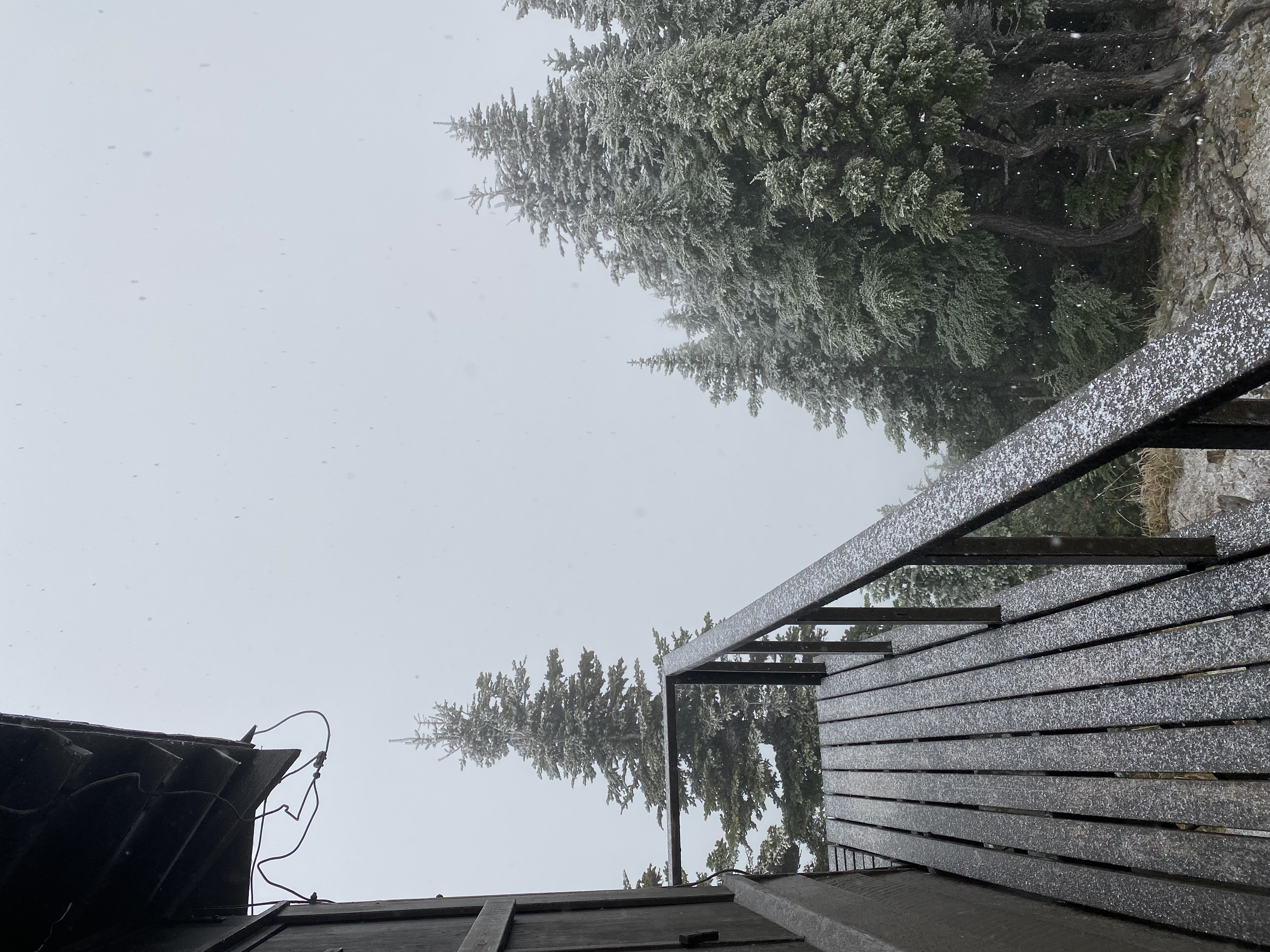 View from the top…

Tolmie Peak is a beautiful mountain north of Mt. Rainier in the middle of Mt. Rainer National Forest. It is a 5-mile out and back up to an observation tower that proved a little facetious in the thick clouds surrounding the area. The peak itself is rather wide, but there are few antenna supporting trees at the top (mostly evergreens that grow a little far off the peak). I actually used the Observation Tower (wood) to set up my dipole, but that wasn’t as well performing as I had hoped. The Tolmie Peak Trail isn’t too difficult with minimal amounts of scrambling. You also get amazing views of the nearby basin: 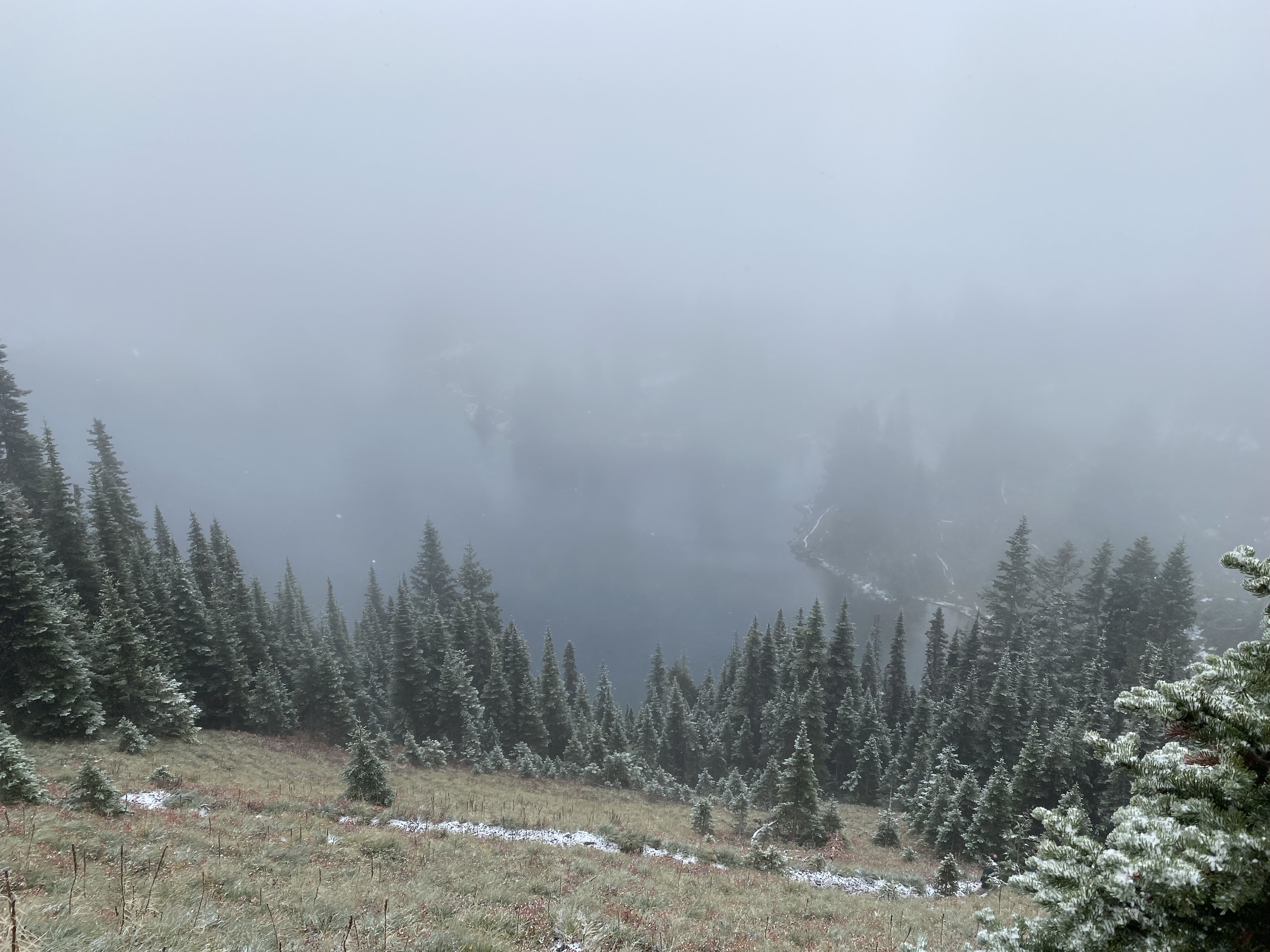 Elizabeth Ridge stood directly across from the Tolmie Peak trailhead. It doesn’t have a quite defined path up to it, but it is only a 1/2 mile walk from the trailhead due East. We took quite possibly the steepest route up and scaled a rock face, but found a nice gentle slope on the way down. To find the gentle trail:

While you won’t get any views as perfect as Tolmie, this is a fun, short peak. The trees up top are excellent for antennas.

This was my first foray into the PNW / W7 region. It was spectacular but incredibly dangerous. Reliable communications and emergency backups for clothes, food, and water are a must. Later in the post, you’ll see our encounter with the snowstorm. 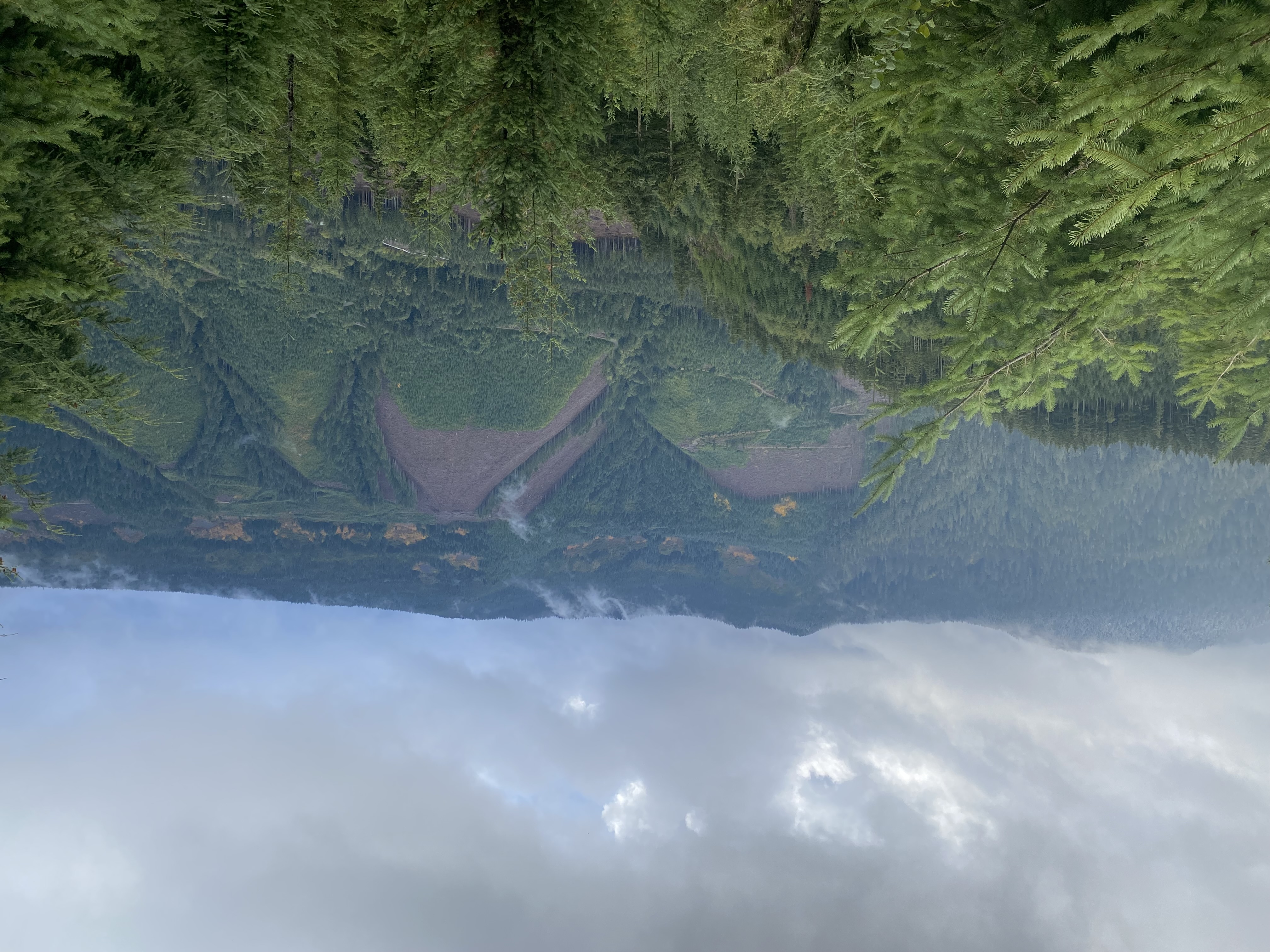 I am still using the new and improved N2WU SOTA Dipole, so my setup is evolving into its final state. It only took about 10 minutes to set up:

Total weight - about 4lbs. My equipment all got covered thoroughly with snow and seemed to work fine. I improved my slinging steps to get the dipole up: 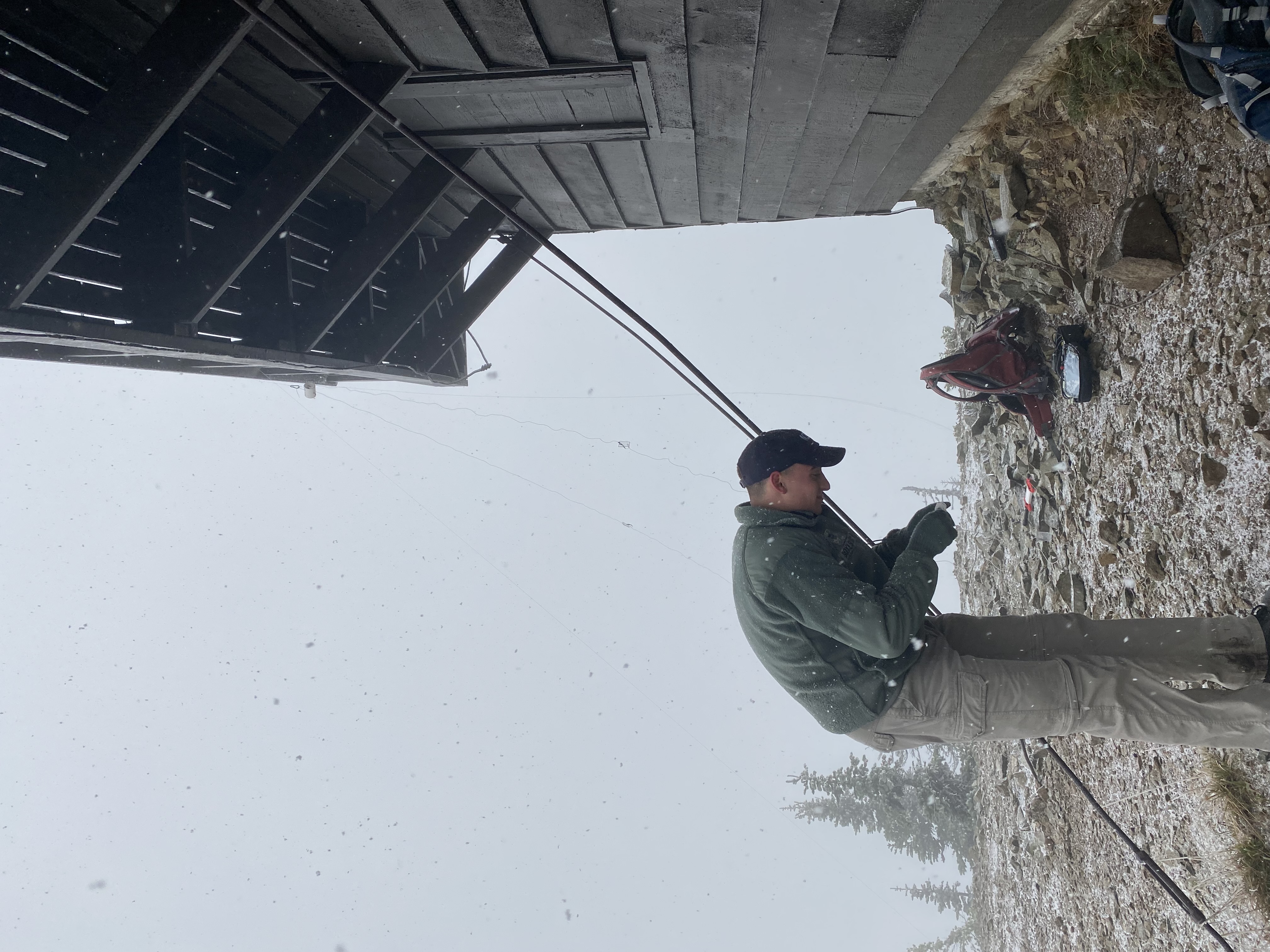 N2WU setting up the antenna with moral support by the camerawoman 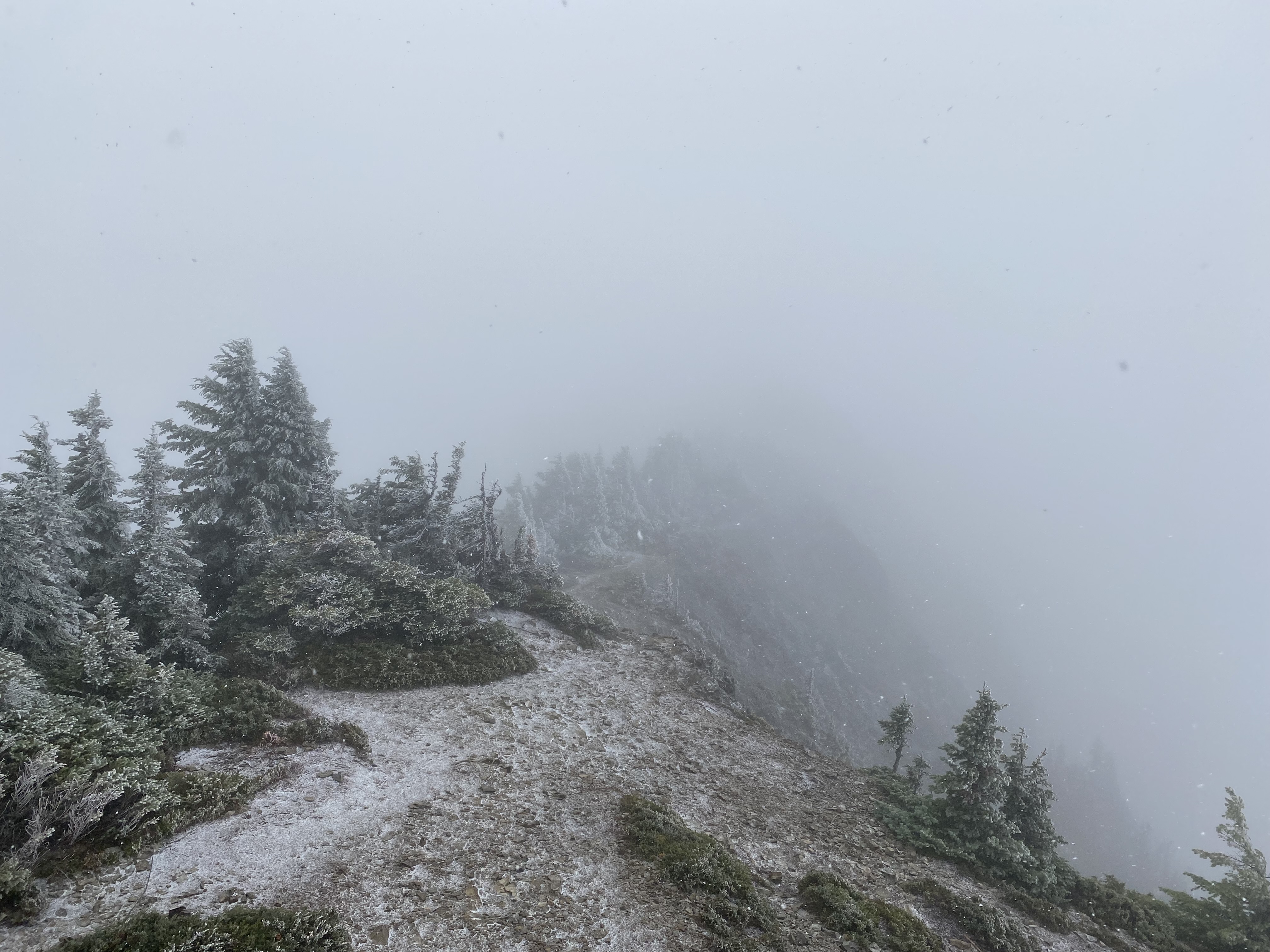 I imagine the park is best in the opposite conditions we had. Since it was early October, it began to precipitate more and more. We witnessed some rain drops on the hike up, but thought nothing of it. Right as we summitted Tolmie, we got caught in a 1” snowstorm leaving everything thoroughly wet. The temperature was my impetus to travel back down; against the mountainside, the winds are much less intense. The temperature meant for some great operating pictures though! 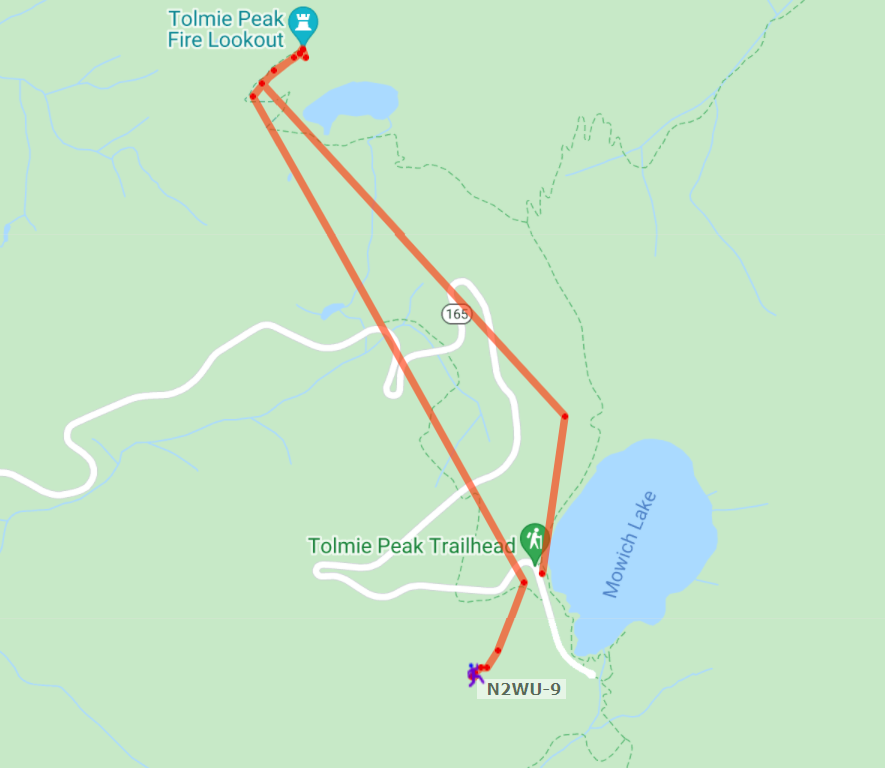 APRS Route for both peaks. Good reception closest to the top, but we noticed better 2M propagation later in the day. 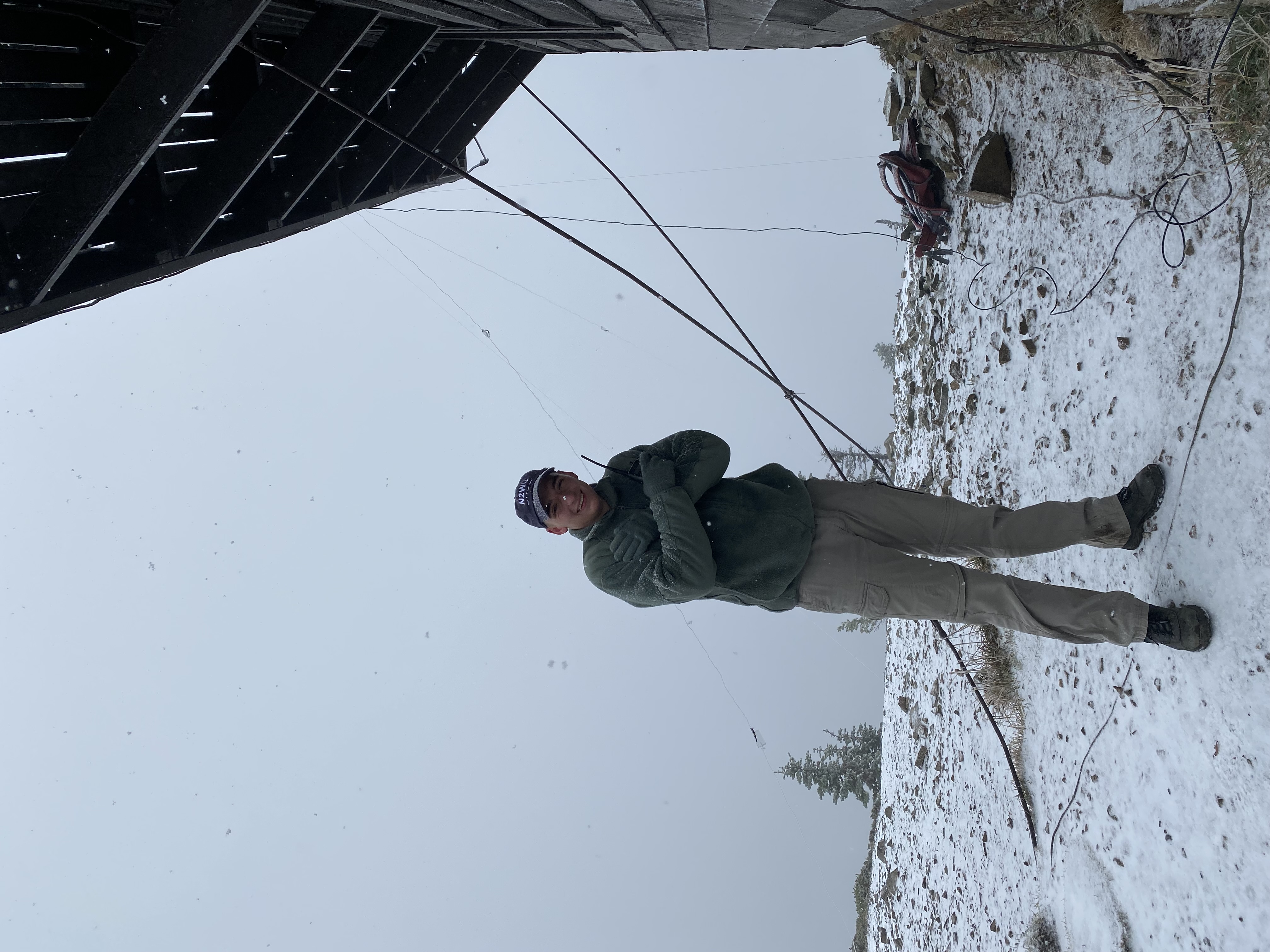 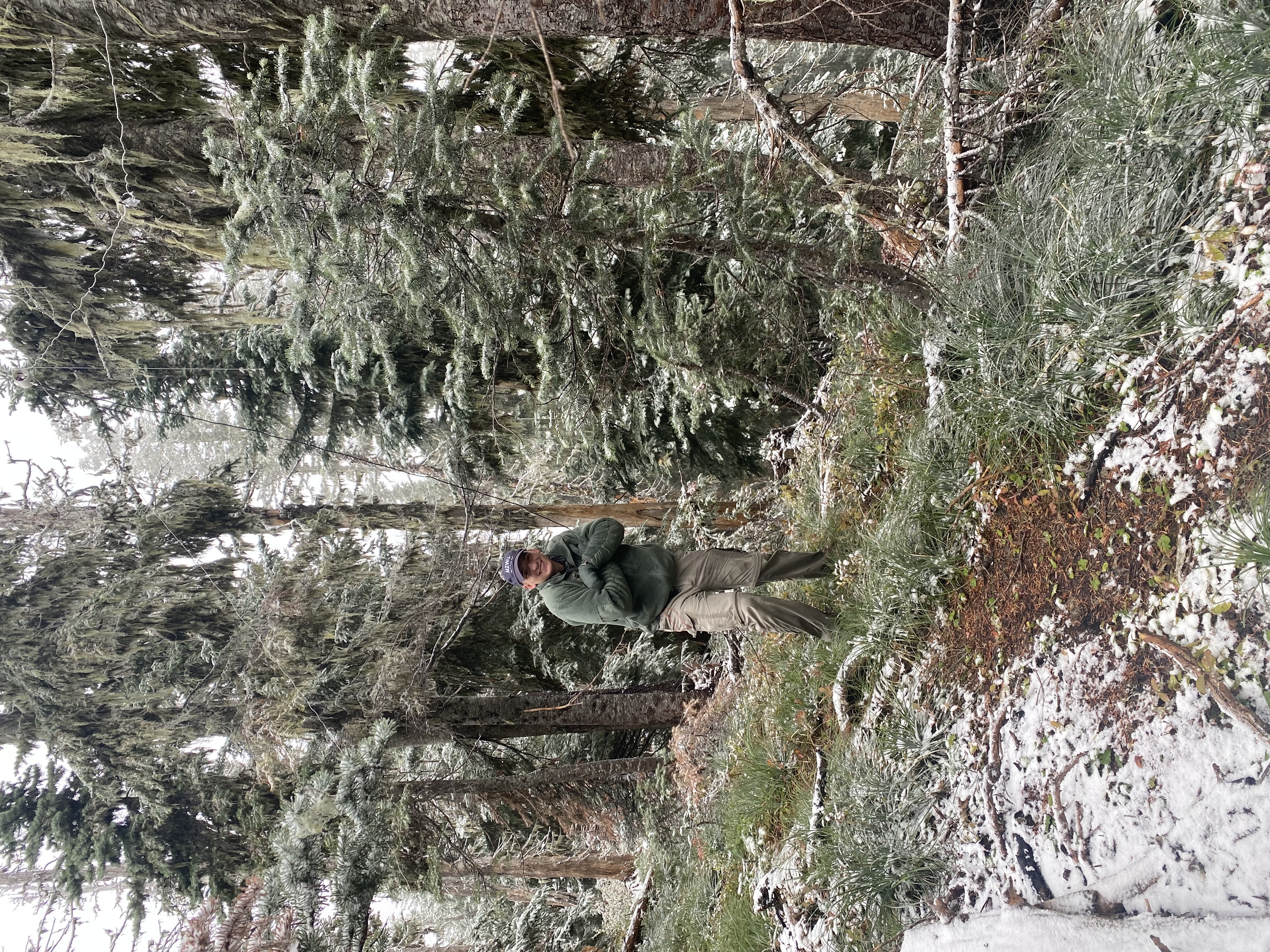 N2WU at Elizabeth Ridge. I didn’t warm up much. 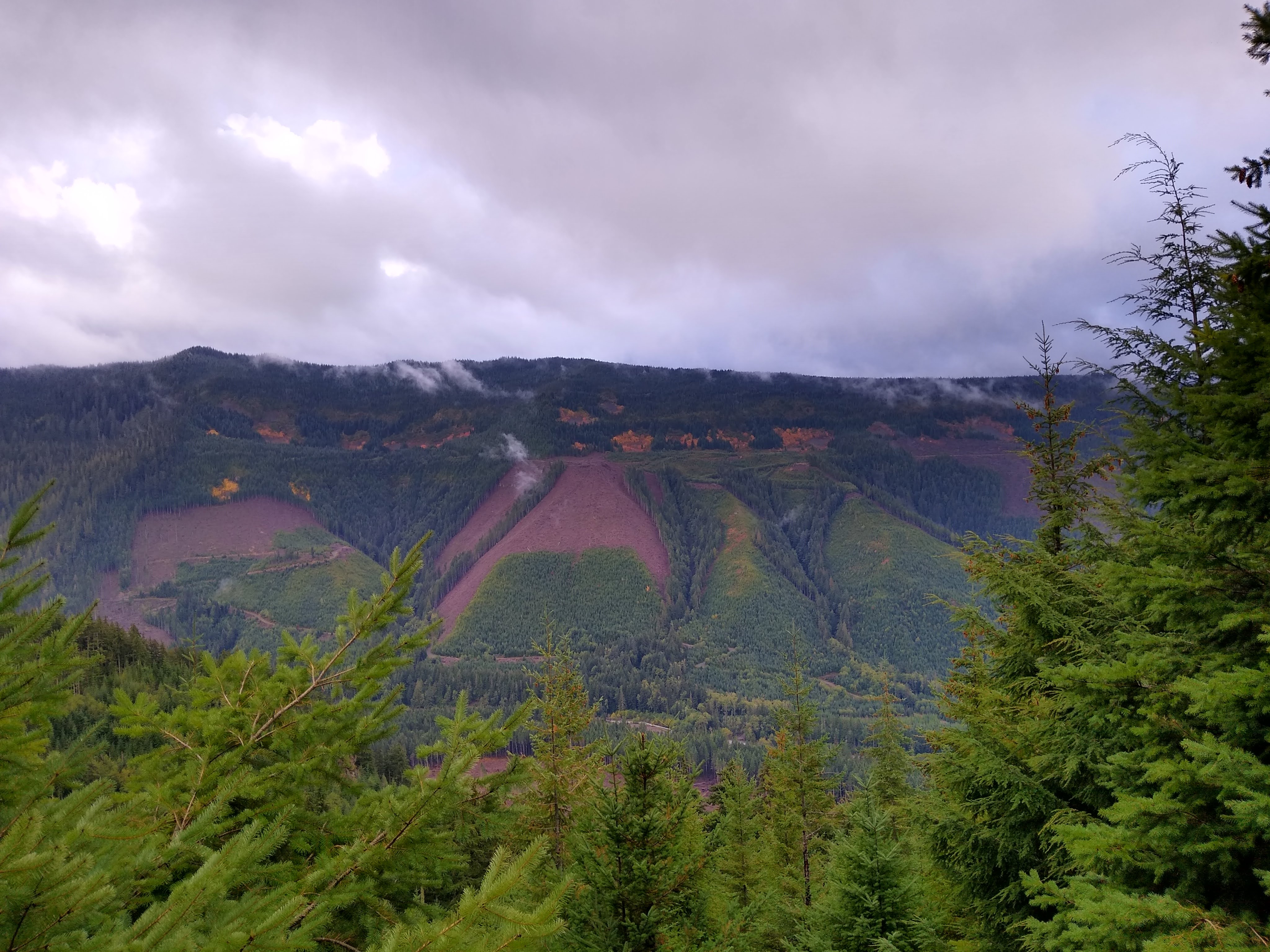 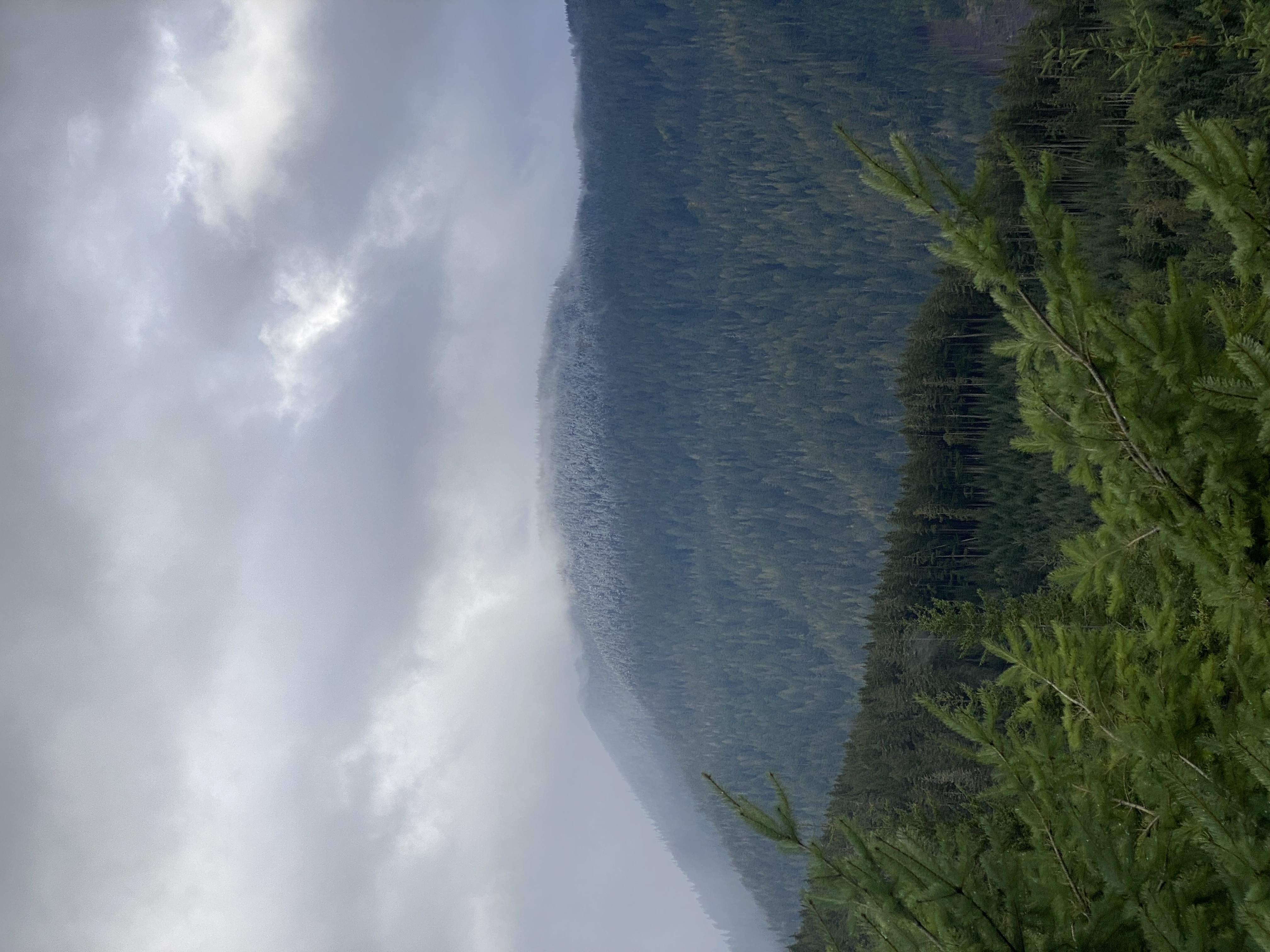 Because of the reduced room at the top of either summit, I decided to stick with mainly 20M at 10W. I encountered a lot of radiation problems on Tolmie (could have been due to the Geomagnetic Storm) so I recommend bringing a mast or using the nearby trees. It seems maybe 12M or 10M would have performed better. Also, consider your radiation direction: Tie your dipole down on the north and south points to radiate east towards the rest of the US. Simplex worked fine, so possibly a directional antenna pointed North (Rainier is to the south) will net you a few more contacts. Thanks to KE7WB (123km away) for helping me out on the peak! Too bad I didn’t get any HF contacts worth logging - I wonder if a better spotting system would help me net a couple more. Here’s my contact list and a KML generated with advice by Steve K2GOG using the ADIF-KML program. 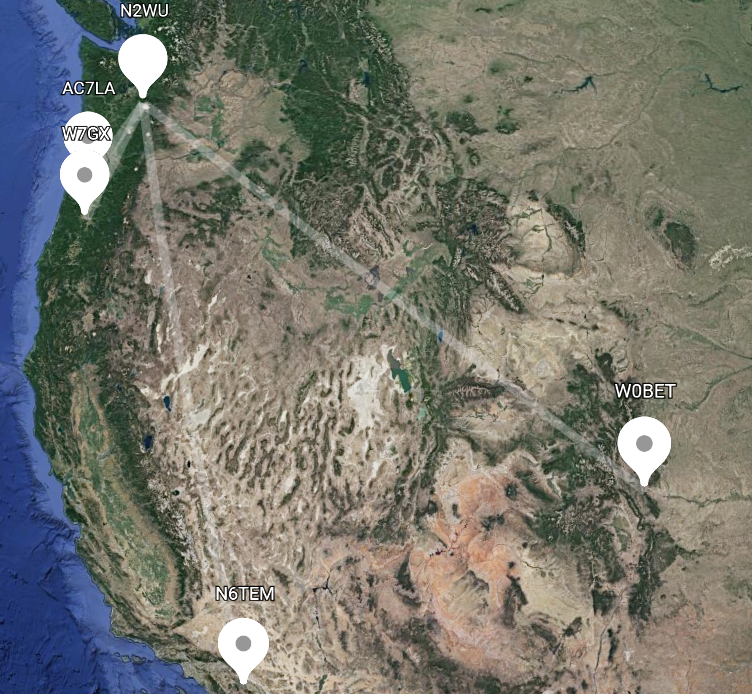 Band conditions weren’t the best for me, so I got my required and didn’t stick around. I tried using the APRS-SOTA Spotting System but I don’t think I got my message out right. I’ll have to try again in a less remote place. Cell service was nonexistent or 1-bar 2G at most - we were able to send some texts/pictures from the top of Tolmie and Elizabeth Ridge.

I am slowly refining my kit for reliable, quick activations. Eventually everything I use will be down to a science, but too bad I can’t try the W7 region every weekend.

This was a nice deposit of 6/12pts into my SOTA bank account and quite the introduction to the PNW. I learned many of the trails from the PNW SOTA Website.