This weekend I had some extra time to work on signal generation. I decided to use MATLAB to encode Slow Scan Television, a fax machine-like way of encoding images for radio processes. I was not wholly successful, but produced meaningful results! Take a look.

My code, as always, is uploaded on Github here. There are a couple of important documents and tests in there as well.

SSTV uses essentially frequency modulation to create messages. Each frequency, from about 1000-2500 Hz, has a unique identity corresponding in the SSTV language. For images, color images use an RGB matrix with their luminance 0-255 that is translated to a frequency 1500-2300 Hz in 3 separate scans of Red, Green, and Blue. This will follow later.

I used a paper from Hamvention 2000 as a “recipe” for creating signals. First, I had to select a sampling frequency. Since all SSTV signals are in the range of about 1000-2500Hz, I used the Nyquist Theorem to select a sampling frequency of 8 kHz; it is comfortably over the 5 kHz minimum. I then used the typical EM wave equation to create my sinusoids of varying length and frequency:

Since the frequency changes constantly for the entire signal, I appended the individual tones of sstv (explained further) to my endproduct “Message Signal.” There are several ways to do this, but I found created an array, then converting the array to a row vector turned out to be the most efficient:

I used this function about 4 times. I encountered difficulties in trying to reuse the array as a matrix, since I reshaped it into a vector. Before I used these arrays, I would clear to ensure I was working with an array and not a vector.

SSTV transmissions begin with a calibration header and a VIS code. Below is the setup for the code:

This performed pretty linearly. The only difficulty occurred on the VIS Code: using the de2bi() function creates a vector in LSB. I used the following code to convert my binary string to a string of frequencies:

I chose SC2-180 for its simplicity. It uses the following modulation scheme:

Next, I sequentially made scans of each line in Red, Green, and Blue iterations. I used the same reshape() function from before:

Finally, I took the array with scan data and combined it sequentially with the sync and porch information:

All I had to do now was combine it with the calibration header, and play it using sound().

This took a slightly different approach. Pulses occur in the middle of color scans, so I had to introduce them while I was scanning lines. Additionally, the color scans occur Green,Blue,Red, which is out of order from RGB. I used this process to accomplish it:

I made a (3,:) matrix that has my entire line, then I inserted pieces of that matrix into the entire Scottie_line. Combining the signal with the calibration header resulted in about the same final result. But how does it work in testing?

Considering it was Mozart’s 265th birthday on the 27th, I used the following 320x256 image for my tests. If I had done this last year, I would have used Beethoven! 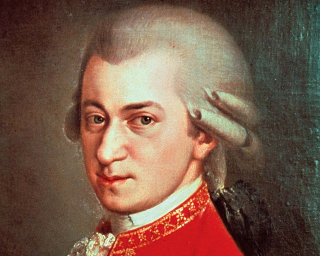 I loaded the image in using imread(). I then used MMSSTV and a virtual cable program to simulate my soundcard as a radio receiver to decode the SSTV Signal.

Unfortunately, it looked like my encoding scheme is incorrect. My signal was the correct length, but I have to take a further look at how SC2 is encoded. I noticed large differences in my signal based on the sampling frequency value, so I will have to take a look there.

However, I tried it again with the “Auto” feature selected. It interpreted the sc2-180 signal as “ML 180” and produced the following result. I am not sure what modulation scheme ML 180 follows, and cannot even find it online.

It has a slant and incredible color discrepancy. However, it hit the target. The signal’s audio recording can be found here. On my research, I found that the ML modes have increased resolution - this image is much higher than any other received ones.

I tried the same method and still received poor, but readable, results. First, forcing selection of “Scottie-1” on MMSTV created the following output:

And letting MMSTV pick “Auto” resulted in selection of the ML-240 mode. Still, I have little information on these signals except that they have better resolution capability.

Once again, just barely readable. The image came out distorted - Mozart looks like he is watching himself on the right side. Additionally, the calibration header sounds widely different from standard headers shown on the recording. My only guess is that I am not modulation/demodulating this signal via SSB.

This was an enjoyable weekend exercise to understand modulation practices at work. I plan on using part of this code/theory with a Hamshield Mini to create a SSTV beacon for our annual weather balloon.

If you have any advice on scottie/sc2 modes or my calibration header, please let me know. I’d like to get this fully operational!