Say what you will about ham radio, but when it gets competitive, it gets extreme. I have seen a couple of dedicated contest stations (K3LR being one of them) and they really do go ham. W2KGY competed in a local foxhunt put on by the QSY Society and I think we’ve found our niche. While this is a loosely nontechnical article, I will post a technical article soon on the homebrew antennas we built. 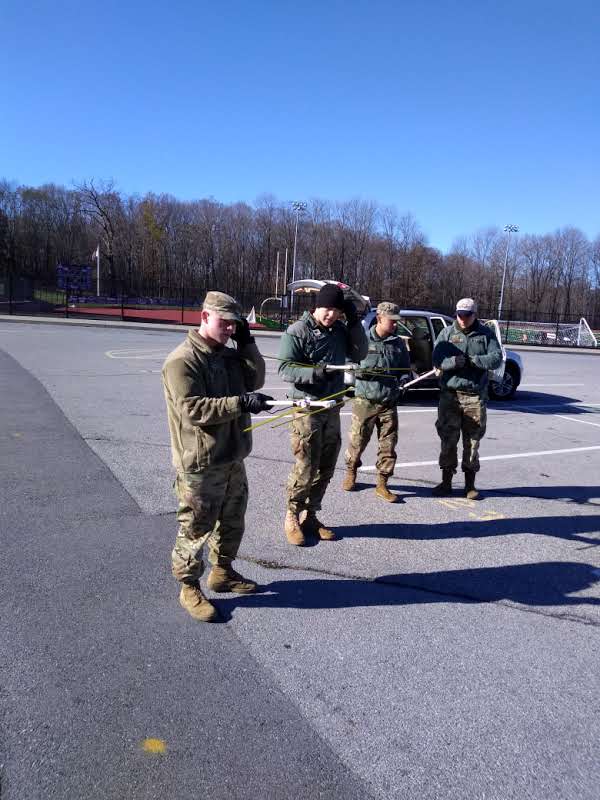 Probably the best thing that helped me for foxhunts was to understand every detail of what was happening, and of course to have a plan. I have been reading Transmitter Hunting: Radio Direction Finding Simplified by Joseph Moell and Thomas Curlee for the past several months and I have a nice grasp on what foxhunts entail. I was able to tell my team they should be getting azimuth checks however often, and what gain pattern they should be thinking of (different for loops than yagis).

Of course, flexibility was also a key in this hunt. Right when we started we heard a clear FM signal, so our high-gain antennas were useless to a point. We actually attenuated these midway through and made all of our equipment surprisingly useful.

Of course, next foxhunt I can still improve on planning. We reviewed the site but could look closer, and probably bring a map. Plotting likely hiding areas can help us out quite a bit. Also programming in a repeater for emergencies, as well as the fox frequency, will make us more prepared.

This was our first event so naturally we were under prepared. I grabbed all the directional antennas we had, which turned out to be a 2m arrow and a 2m 3-element Tape Measure Yagi . Both of these were pretty good gain antennas; I have used them for satellite/ISS receiving in the past. I predicted they would give us a nice initial bearing for a relatively weak signal. However, as later stated, the strong signal given by the transmitter meant we really didn’t need an expensive, high-gain antenna.

I also made a 2 element variant of the tape measure yagi for closer attenuation. More will follow on its antenna pattern and radiation, but it did outstanding for its job as a close-signal antenna. I also made a loop+sense antenna, made from chapter 4 of the novel posted earlier. Both of these did great for close signals.

Lastly, I wanted to showcase my new toy, a Kerebros SDR with circular array direction finding. I tested it prior but ran into power issues on competition day, so I never actually got to use it. This SDR has lots of capabilities that I haven’t been able to unpack yet. Expect an update soon.

Installing the UCA for KerebrosSDR

As previously stated, my book knowledge on foxhunts proved pretty useful. I knew we had to get a direction, and find a radio. It’s in the name, right?

Part of our success was from prior knowledge. The fox told us he would be parking in a conspicuous spot, in a public area. We knew this meant schools/churches/parks, not private property or under an overpass somewhere.

We got an initial “that way” direction, then checked with a compass where “that way” was. We then looked on a map with our azimuth and circled every public parking spot for a couple miles on direct course with the azimuth. We simply drove to these spots, rechecked the azimuth, and kept on our merry way. It was definitely simple but it definitely worked.

If anyone doubts my advice, I think of Ron Swanson from Parks and Rec:

Surprisingly, we were the first to find the fox for the event. I would have been fine finding the fox at all, much less winning the event. Either way, I have listed out what I found to be the most important keys to success.

This event was a lot of fun and something I hope to bring back to USMA next semester. Below are some additional photos.